By Jessica Halloran The Australian 5 May 2021

"Our clients now feel heard, they feel believed, that their truth has now been accepted — that’s an important validating factor for most survivors." 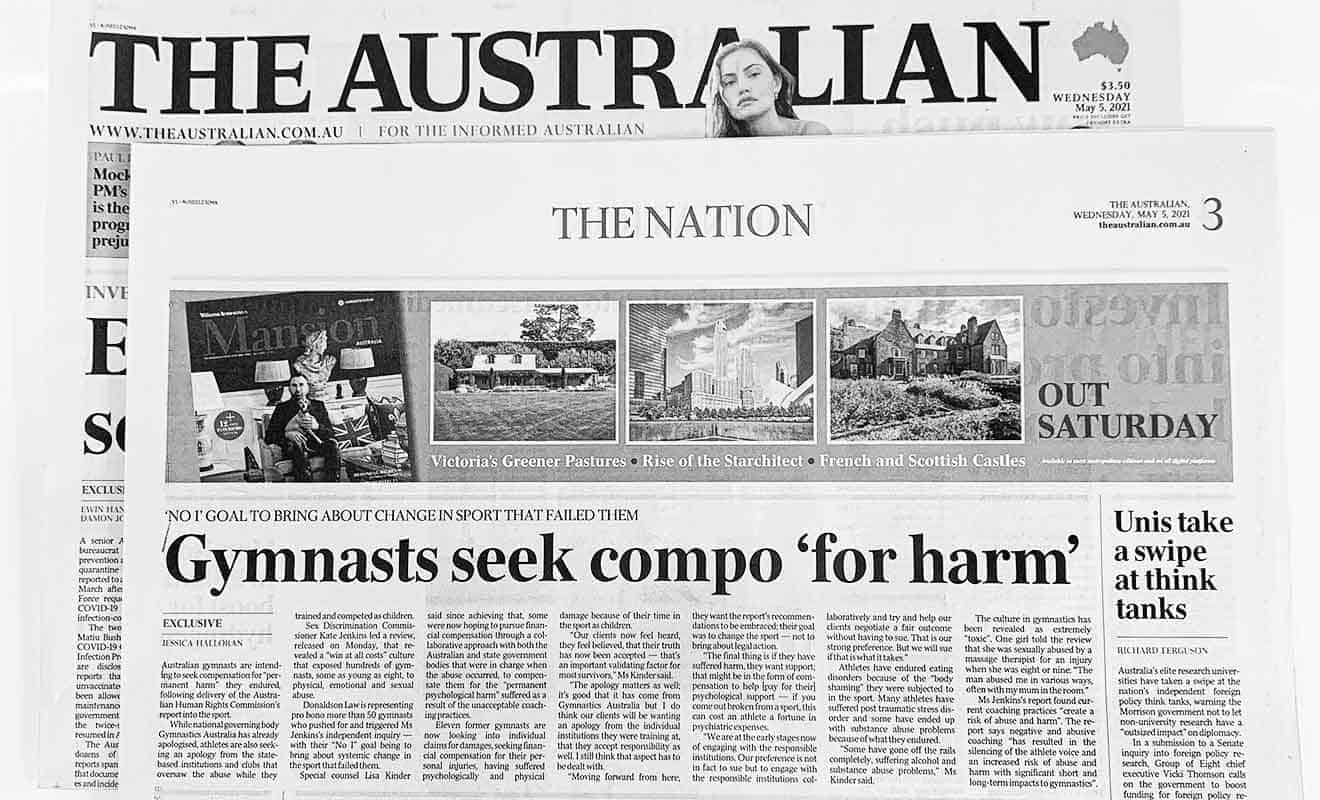 Australian gymnasts are intending to seek compensation for “permanent harm” they endured, following delivery of the Australian Human Rights Commission’s report into the sport.

While national governing body Gymnastics Australia has already apologised, athletes are also seeking an apology from the state-based institutions and clubs that oversaw the abuse while they trained and competed as children.

Sex Discrimination Commissioner Kate Jenkins led a review, released on Monday, that revealed a “win at all costs” culture that exposed hundreds of gymnasts, some as young as eight, to physical, emotional and sexual abuse.

Donaldson Law is representing pro bono more than 50 gymnasts who pushed for and triggered Ms Jenkins’s independent inquiry — with their “No 1” goal being to bring about systemic change in the sport that failed them.

Special counsel Lisa Kinder said since achieving that, some were now hoping to pursue financial compensation through a collaborative approach with both the Australian and state government bodies that were in charge when the abuse occurred, to compensate them for the “permanent psychological harm” suffered as a result of the unacceptable coaching practices.

Eleven former gymnasts are now looking into individual claims for damages, seeking financial compensation for their personal injuries, having suffered psychologically and physical damage because of their time in the sport as children.

“Our clients now feel heard, they feel believed, that their truth has now been accepted — that’s an important validating factor for most survivors,” Ms Kinder said.

“The apology matters as well; it’s good that it has come from Gymnastics Australia but I do think our clients will be wanting an apology from the individual institutions they were training at, that they accept responsibility as well. I still think that aspect has to be dealt with.

“Moving forward from here, they want the report’s recommendations to be embraced; their goal was to change the sport — not to bring about legal action.

“The final thing is if they have suffered harm, they want support; that might be in the form of compensation to help [pay for their] psychological support — if you come out broken from a sport, this can cost an athlete a fortune in psychiatric expenses.

Athletes have endured eating disorders because of the “body shaming” they were subjected to in the sport. Many athletes have suffered post traumatic stress disorder and some have ended up with substance abuse problems because of what they endured.

“Some have gone off the rails completely, suffering alcohol and substance abuse problems,” Ms Kinder said.

The culture in gymnastics has been revealed as extremely “toxic”. One girl told the review that she was sexually abused by a massage therapist for an injury when she was eight or nine: “The man abused me in various ways, often with my mum in the room.”