By Jessica Halloran The Australian 29 June 2021

Sports Integrity Australia boss David Sharpe says administrators can no longer “bury” scandals. And following Olympic swimmer Maddie Groves’s claims of “misogynistic perverts” and abuse in the sport, he has urged athletes to come forward to the government watchdog with complaints. 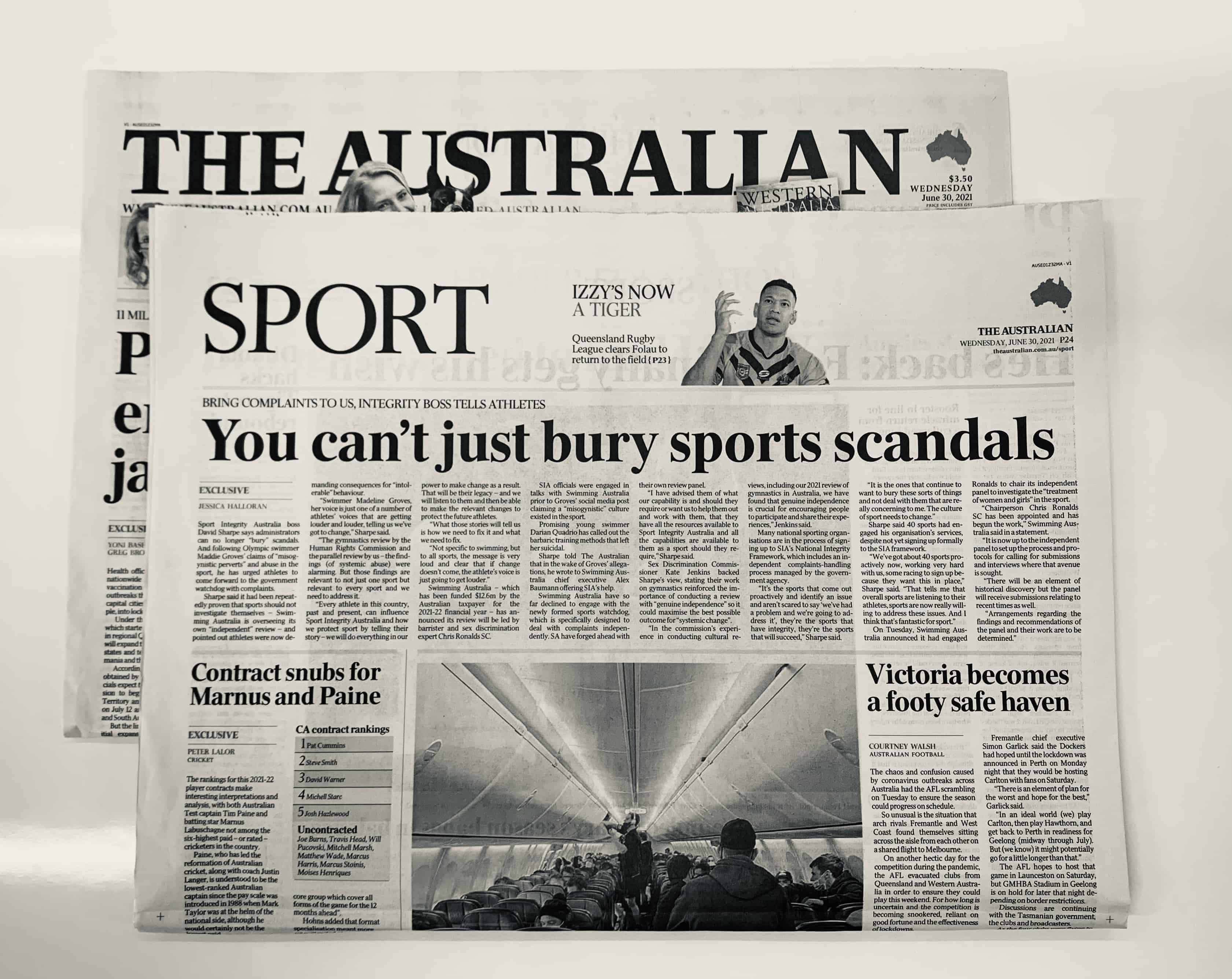 Sharpe said it had been repeatedly proven that sports should not investigate themselves — Swimming Australia is currently overseeing its own “independent” review — and pointed out athletes are now loudly demanding consequences for “intolerable” behaviour.

“Swimmer Madeline Groves, her voice is just one of a number of athletes’ voices that are getting louder and louder, telling us we’ve got to change,” Sharpe said.

“The gymnastics review by the Human Rights Commission and the parallel review by us — the findings (of systemic abuse) were alarming. But those findings are relevant to not just one sport but relevant to every sport and we need to address it.

“Every athlete in this country, past and present, can influence Sport Integrity Australia and how we protect sport by telling their story — we will do everything in our power to make change as a result. That will be their legacy — and we will listen to them and then be able to make the relevant changes to protect the future athletes. What those stories will tell us is how we need to fix it and what we need to fix.”

“Not specific to swimming, but to all sports, the message is very loud and clear that if change doesn‘t come, the athlete’s voice is just going to get louder and louder.”

Swimming Australia — which has been funded $12.6 million by the Australian taxpayer for the 2021-22 financial year — has announced its review will be led by barrister and sex discrimination expert Chris Ronalds SC.

SIA officials were engaged in talks with Swimming Australia prior to Groves’s tweet claiming a “misogynistic” culture existed in the sport.

Promising young swimmer Darian Quadrio has called out the barbaric training methods that left her suicidal.

Sharpe told The Australian that in the wake of Groves’s allegations, he wrote to Swimming Australia CEO Alex Baumann offering SIA’s help.

Swimming Australia have so far declined to engage with the newly formed sports watchdog, which is specifically designed to deal with complaints independently. SA have forged ahead with their own review panel.

He added SIA’s work on the gymnastics review had “given us a platform to show Australian athletes that we are independent and we will deal with things independently”.

Sex Discrimination Commissioner Kate Jenkins backed Sharpe’s view, stating their work on gymnastics reinforced the importance of conducting a review with “genuine independence” so it could maximise the best possible outcome for “systemic change”.

“In the commission’s experience in conducting cultural reviews, including our 2021 review of gymnastics in Australia, we have found that genuine independence is crucial for encouraging people to participate and share their experiences,” Jenkins said. “Ensuring any cultural review process is independent, inclusive, and safe provides confidence for victim-survivors to participate, and maximises the best possible outcomes for a review to deliver systemic change.”

Many national sporting organisations are in the process of signing up to SIA’s National Integrity Framework, which includes an independent complaints-handling process managed by the government agency.

“It is the ones that continue to want to bury these sorts of things and not deal with them that are really concerning to me. The level of allegations we’ve seen as a new agency at all levels — right through to some that we were referred to law enforcement and we’ve seen people charged criminally — to me it is a real concern. The culture of sport needs to change.”

Sharpe said 40 sports had engaged his organisation’s services despite not yet signing up formally to the SIA framework.

“We’ve got about 40 sports proactively now, working very hard with us, some racing to sign up because they want this in place,” Shape said. “That tells me that overall sports are listening to their athletes, sports are now really willing to address these issues. And I think that’s fantastic for sport, we’ve got a way to go.”

“I am not criticising swimming at this point, we have a lot of sports that have come to us that really are proactive and wanting this, are looking at it, some are working more proactively than others. So at this point in time, (SA have) indicated they’re considering it and it will take some time. How long it takes for a bigger sport that has the resources of lawyers and integrity officers will be much different to the majority of sports that have no capability or resources.”

On Tuesday Swimming Australia announced it had engaged Ronalds to chair its independent panel which will investigate the “treatment of women and girls” in the sport.

As it stands Swimming Australia’s terms of reference are: the structures and systems across Australian swimming; the behaviour and conduct of people in authority; and ways to support the advancement of women in high-performance coaching roles.

“Chairperson Chris Ronalds SC has been appointed and has begun the work,” Swimming Australia said in a statement. “It is now up to the independent panel to set up the process and protocols for calling for submissions and interviews where that avenue is sought.

“There will be an element of historical discovery but the panel will receive submissions relating to recent times as well.”